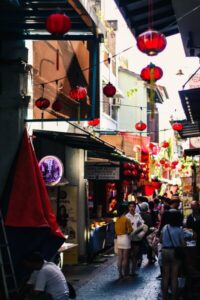 The multiracial makeup of the Malaysian population translates into a potpourri of cultural practices. Each ethnic group and religion has its own festivals.

Different People and Culture of Malaysia

The Muslim community celebrates 3 major festivals: Hari Raya Aidilfitri (Hari Raya Puasa), celebrated at the start of the 10th month in the Islamic calendar; Hari Raya Aidiladha (Hari Raya Korban), celebrated in Zulhijjah (the 12th month); and Maulidur Rasul which falls in the month of Rabi’ul Awal (the 3rd month in the Muslim calendar). The Malaysian Muslim community also observes other festivals like Awal Muharam (Maal Hijrah), Nuzul Quran as well as Israk and Mikraj.

The Hindus celebrate Deepavali or the Festival of Lights, in the month of Aippasi usually in October or November in the Tamil calendar. Thaipusam, another major Hindu festival marked by penitential rituals, is celebrated in January.

The Buddhist community celebrates Wesak Day in May.

The Pesta Keamatan or Harvest Festival is the main celebration for the Kadazans in Sabah.

The Dayaks of Sarawak, who comprise the Ibans and Bidayuhs, celebrate Gawai Dayak Festival on 1 June every year.

The intermingling of cultures and mutual sharing in the festivals in Malaysia underscores the racial understanding and cultural harmony unique to Malaysian society.

Click here for our next article about Festivals in Malaysia.