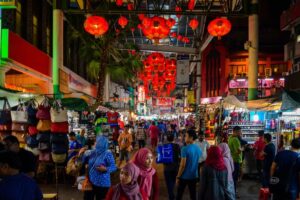 The different kinds of festivals in Malaysia show its diverse culture. Explore this beautiful country and enjoy some of the Malaysian festivals and celebrations.

Hari Raya Aidilfitri
The most joyful of Muslim celebrations, Hari Raya Aidilfitri is celebrated after Ramadhan, the fasting month. During this occasion, Muslims working in the towns and cities make an exodus for their kampung or villages. Special prayers are held in mosques and it is a season when Muslims ask for forgiveness from their family members and friends.

Thaipusam
This day of penance and thanksgiving for Hindus begins with a grand procession of the magnificent silver chariot bearing the statue of Lord Subramaniam, the God of Prosperity. In an atmosphere electric with drumming and chanting, holy water is sprinkled on the deity’s route and thousands of fresh coconuts are smashed, symbolizing the washing away of sins.

Chinese New Year
A celebration lasting for 15 days beginning from the first day of the Chinese lunar calendar. The Chinese community ushers in the new year with a joyful family reunion dinner, a visit to the temple to seek the blessings of the God of Prosperity, and giving ‘ang pow’ or red packets containing money by parents to their children or among relatives and well-wishers.

Hari Raya Aidil Adha
The conclusion of the pilgrimage in Mecca is marked by the Hari Raya Aidil Adha celebrations. Sacrifices of cattle or goats are made by Muslims to commemorate Prophet Abraham’s test of faith by God when he was asked to sacrifice his son.

First Muharram (Ma’al Hijrah)
Maal Hijrah, the first day of the new Islamic calendar year, is celebrated on a moderate scale with gatherings at public halls and mosques where special prayers, sermons, and Quranic recitals are held to usher in the Muslim new year.

Wesak Day
Wesak is celebrated by Buddhists to commemorate the birth, enlightenment, and death of Buddha – all three events have taken place on the same lunar date according to Buddhist reckoning. Buddhists observe a vegetarian diet to cleanse themselves prior to the occasion.

Sabah Kaamatan Festival
Ancient traditions, rites, and customs are the order of the day as the indigenous Kadazan-Dusun of Sabah offers thanksgiving for a bountiful harvest. The ‘Magavau’. a cleansing and blessing ritual performed by the Bobohizan or high priestess will keep you spellbound. It’s celebrated on 30-31 May annually.

Sarawak Gawai Festival
The end of the paddy harvesting season in Sarawak is cause for joyous celebration as the indigenous Ibans and Bidayuhs indulge in much merry-making, traditional dancing, and drinking of tuak, a potent rice wine.

Prophet Muhammad’s Birthday
The birthday of the Prophet Muhammad or Maulidur Rasul is an important event in the Muslim calendar marked by processions to demonstrate the solidarity of believers. Prayers, sermons, and religious discussions are held at this time to strengthen the faith and consolidate the spirit of the Muslim community.

Moon Cake Festival
The mooncake festival had its origins during the Mongolian dynasty in China. The event is celebrated on the 15th day of the eighth moon (August/September) with colorful lantern processions and the partaking of mooncakes.

National Day
Malaysia’s National Day is celebrated on the 31st of August in a show of patriotism, unity, and rejoicing by Malaysian of all races and creeds. A spectacular parade is held in the morning at the Merdeka Square in Kuala Lumpur to mark the occasion. His Majesty, the King, and government leaders are joined by a mammoth crowd in witnessing the parade. The ‘Jalur Gemilang’ (Malaysian flag) is proudly flown at office buildings, private homes, and on vehicles. Stage shows, competitions, and exhibitions are held in various states.

Deepavali
For the Hindus, Deepavali or the Festival of Lights signifies the triumph of good over evil. Celebrated during the 7th month of the Hindu calendar, a traditional oil bath precedes the festivities. The celebration includes visits to temples and prayers at household altars. Hindu homes are adorned with lights or oil lamps to symbolize the victory of Lord Krishna over the demon, Ravana.

Christmas
There is much joy and gaiety as Christians celebrate the birth of Christ with parties, caroling, and evening mass. Streets, hotels, and shopping complexes are decorated with brilliant lights and ornaments to create a yuletide atmosphere-the Malaysian way. The spirit of giving extends beyond homes and individuals like hotels, shopping complexes and corporate companies hold concerts and shows as well as organize charity drives.

Click here for our next article about Malaysia’s National Flower.