Sarawak, the largest state in Malaysia, covers an area of 124,450 sq km and is divided into 9 divisions.

With two-thirds of its land area covered with tropical rainforests, Sarawak is well known for its natural and cultural wonders. The hornbill, a protected bird, is the state symbol.

The state of Sarawak has a fair share of tourist attractions, including the Sarawak Museum claiming to be one of the most comprehensive in South East Asia, colorful ethnic traditions and festivities, as well as marvelous national parks.

Among the many natural wonders in the state are Mulu and Niah caves, and the breathtaking Bako National Park.

Express boats are the main means of travel between coastal towns. 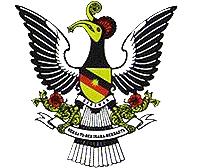 A Kenyalang (Hornbill) represents the State emblem. The 13 secondary feathers on its wings and tail represent the 13 states of Malaysia. The hibiscus, which is the national flower, is found below the wings and the State motto is ‘Bersatu, Berusaha, Berbakti’ (United, Industrious, Loyalty). On the bird’s chest is a shield with the state colors: black, red, and yellow.

Red symbolizes the courage, confidence, and sacrifices of the people in their efforts to achieve and maintain progress in the state. Yellow represents the supremacy of the law and the unity found amongst Sarawak’s diverse races. Black denotes the abundant natural resources of Sarawak: petroleum and timber. The yellow nine-pointed star represents the nine divisions and the aspirations of the people to improve their quality of life.

Under the Brunei Sultanate in the 16th century, Sarawak was divided into districts governed by Pangerans, representatives of the Sultan. Dissatisfaction with the tax system and administration resulted in an insurgency in the 17th century. The Sultan of Brunei had to enlist the help of Pangeran Muda Hashim who in turn sought the assistance of James Brooke.

Following James Brooke’s success in thwarting the insurgency, he was appointed the Governor of Sarawak on 24 September 1841. He became Sarawak’s first “White Rajah” from 1846 to 1868 when Sarawak gained independence from Brunei. A British-style administration was introduced and local chieftains were appointed as his advisers.

Charles Brooke, who succeeded James Brooke in 1868 divided Sarawak into five divisions. Sarawak came under British rule and a British adviser was appointed in 1888.

In 1917, Charles Vyner Brooke succeeded Charles Brooke. The implementation of a written constitution drawn up in 1941 was precluded by the Japanese invasion in the same year.

With the Japanese surrender at the end of World War II, Sarawak was placed under the British Military Administration till 1946 when it became a British Crown Colony. Sir Charles Arden was appointed as the first British Governor.

The formation of the Federation of Malaysia comprising the Malay Federated States, Singapore, Sabah, Sarawak and Brunei was proposed in 1961. Initially, this was met with resistance from the political leaders of Sarawak. Tunku Abdul Rahman Putra al-haj led missions to Sabah and Sarawak to detail the proposal and assure the leaders as well as the people. The leaders of Sarawak were also invited to join the Commonwealth Parliamentary Conference in Singapore. Subsequent to this, The Cobbold Commission was set up to seek the views of the people regarding the proposal.

Sarawak is famous for the Kenyalang bird or hornbill, which is rarely found in other states. The longest river in Malaysia, the Rajang River, is found here. National parks, waterfalls, caves, and native villages are other attractions. Jungle trekking offers a glimpse of the rich and abundant wildlife of Sarawak. The Niah Cave in Niah National Park houses the location of the oldest human remains found in Southeast Asia. The world’s largest cave passage, the largest cave system, and the largest rock chamber can be found in the Gunung Mulu National Park.