The popular beach resort Port Dickson has been a big draw among local and foreign sun-seekers.

Other than beaches, visitors will also find the Minangkabau architecture here fascinating. The traditional architecture features sweeping buffalo horn-shaped roof peaks. This unique feature has even been incorporated in newer buildings such as the State Mosque and the State Secretariat Building.

The ultramodern Kuala Lumpur International Airport at Sepang is a mere 30 minutes away from the state capital Seremban. With the completion of the North-South Highway, Negeri Sembilan is even more easily accessible from major towns in West Malaysia.

Tourists can also choose to take a train from Butterworth, Kuala Lumpur, and Singapore to Seremban, from where frequent buses travel to the popular beach resort of Port Dickson. The rail service to the east coast states of Pahang and Kelantan begins from the town of Gemas. 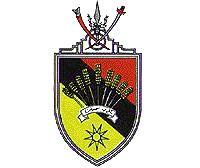 Negeri Sembilan emblem features a shield with three diagonal bands of color. Red symbolizes Negeri Sembilan’s past links with the British; black stands for the Undangs, and yellow is the color of royalty. The nine stalks of paddy in the center of the shield stand for the nine states in the original federation of Negeri Sembilan. The sword and the sheath above the shield represent justice; while the changgai putri staff between them is the symbol of the sovereignty of the Yang Dipertuan Besar. The nine-pointed star below the shield also represents the original nine states.

The yellow field of the flag represents the State Ruler. The canton in the top left-hand corner has two colors that divide it diagonally. The color red represents the rakyat (citizens), and black is the symbol of the four Sundays (traditional chiefs).

The early history of Negeri Sembilan saw the migration of the Minangkabau people from the island of Sumatra to the west coast of the Malay Peninsula during the sixteenth and seventeenth centuries. These people settled mainly in Naning, Sungai Ujong, and Rembau. By the mid-nineteenth century, they had formed a loose coalition of nine states, each with their own leader, with the head of the coalition rotating among the nine chiefs. (Malaysia has adopted this system for the appointment of the Yang Dipertuan Agong or King.)

Nanjing, Sungai Ujong, and Rembau lay within the Johor-Riau Empire and were placed under a head called Datuk who was appointed to oversee the territory.

In 1770, the disintegration of the Johor-Riau Empire and the rise of the Bugis Sultanate in Selangor precipitated insurrections in Rembau, Sungai Ujong, Johol, and Ulu Muar. The Minangkabau’s then turned to the Pagar Ruyong royal house in Sumatra for a ruler who could protect them. Consequently, Raja Melewar was proclaimed the first Yang Dipertuan Besar of Negeri Sembilan in 1773.

The problems in Negeri Sembilan posed a threat to the tin trade with the Straits Settlements. This led to British intervention and subsequently Martin Lister was appointed as the first British Resident of Negeri Sembilan.

Later, the Resident system proved ineffectual and Sir Frank Swettenham initiated the proposal of a federation of states. With the consensus of the sultans, the agreement was ratified in 1896. Selangor, Perak, Pahang and Negeri Sembilan were united under a central administration. They were to be known as the Federated Malay States (FMS) and administered by a Resident-General, thus becoming a British protectorate. Swettenham was appointed the first Resident-General of the FMS.

The FMS continued until the Japanese invasion in 1941. After the surrender of the Japanese, Negeri Sembilan was placed under the British Military Administration from September 1945 to early 1946.

As early as 1943, plans for a Malayan Union were being discussed in London. On 10 October 1945, it was presented in the British Parliament. According to the plan, Penang, Malacca, and the 9 other Malay states were to be united under a Malayan Union. Sir Harold MacMichael was despatched to obtain the agreement of the Malay rulers. However, the Malay opposition derailed the plan. The Malays united under the leadership of Dato’ Onn Jaafar to form the United Malays National Organisation (UMNO) on 11 May 1946. Two years later, the Federation of Malaya was established on 1 February 1948 and Malaya achieved independence from the British on 31 August 1957.

Negeri Sembilan is synonymous with the Minangkabau people. These early settlers from Sumatra left a legacy of a unique social system as well as architecture. The Malays of Negeri Sembilan still practice the Adat Perpateh, a matrilineal social system peculiar to this State. Fine examples of traditional buildings in the characteristic Minangkabau-style, with sweeping buffalo horn-shaped roofs are still to be seen in outlying towns such as Sri Menanti, Terachi, and Linggi. The tourist attractions of the State vary from destinations of historical interest such as the Royal Museum in the royal town of Sri Menanti; to Port Dickson, one of the oldest beach resorts; recreational parks, and hot springs.