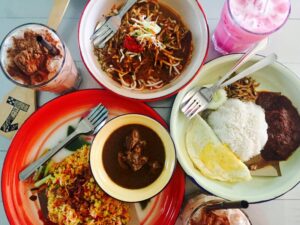 Eating out in Malaysia is a real gastronomic adventure. There is such a great variety; spicy Malay Food, a seemingly endless variety of Chinese food, exotic cuisine from North and South India, as well as Nyonya and Portuguese Food.

Locals make little distinction between eating at inexpensive hawker stalls and pricier restaurants – the quality of food at a stall is usually just as good, and many offer regional dishes which aren’t available elsewhere. There is, though, a difference between the stalls themselves.

Traditionally, they were open-air and many still line the traffic-choked roads in little enclaves throughout the city, but increasingly stalls are found grouped together in food courts inside buildings, where the food is usually no more expensive but the surroundings are air-conditioned.

Good as the stalls can be, for really special local cuisine you’ll need to dine out at one of the big hotels since most Malay restaurants in KL serve a limited range of dishes. The exception is at festival times when the stops are pulled out and imaginative Malay cuisine is available throughout the city – lookout for hotels offering special buffets.

Finding good Chinese or Tamil and North Indian food is much easier; it’s served in cafés and restaurants in both Chinatown and Little India. In Little India especially, the cafés and hawkers do a manic trade at lunchtime in excellent banana leaf curries, murtabak, tosai and roti.

The majority of the restaurants and cafés open daily from 11 am or noon until midnight. Most restaurants stay open throughout the year, though note that everything will be closed during the two-day Hari Raya festival, and most Malay restaurants close during Ramadan month.

Here are some places to dine at while you are in Malaysia:

Dining In The Dark KL 章卡暗之馆

It’s difficult to be precise about prices at restaurants in KL, save to say that you’ll generally spend more than at a hawker stall, but rarely have to fork out more than RM50 per person. That said, even in top-class restaurants it’s possible to sit down and just order a plate of noodles at lunchtime; the reviews give an idea of how much you can generally expect to pay for a decent meal. It’s also worth looking out for buffets and special deals at the top hotels.

Click here for our next article about Malaysian Cuisine.