Kelantan, translated literally as the ‘Land of Lightning’ is a land of irresistible delights with its charming fishing villages, verdant padi fields, and languid palm-fringed beaches.

The state of Kelantan has a population of about 1.4 million, of which 95% are Malays while the rest are Chinese, Indians, and Thais.

Located at the northeastern corner of Peninsular Malaysia, Kelantan is known as the cradle of Malay culture. The Kelantanese have over the centuries preserved their age-old customs and traditions. Here, you can see colorful kites, giant tops as well as fascinating shadow puppet plays.

Kelantan is home to giant tops, multi-colored giant kites, and centuries-old skin puppets (wayang kulit). The ancient traditions are well preserved and very much alive in Kelantan, and the state has since been known as the ‘Cradle of the Malay Culture’.

Within the state capital, trishaws are a big hit among foreign tourists and locals alike. 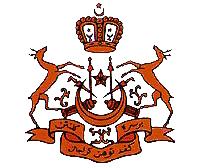 The central motif of the state emblem is the crown, the symbol of the Sultan’s sovereignty. The crescent moon and star are the symbols of Islam. On either side of the star, the spears and keris signify the strength of the Kelantan Malays, while the cannon symbolizes the readiness of the State to defend itself. The deer on the extreme left and right commemorates the historic reign of Kelantan’s female ruler, Che Siti Wan Kembang, during the 14th century. She ordered the State gold coinage to be stamped with the design of a deer (kijang), her favorite animal. The English translation of the state motto which appears in a white banner below means “To God the Government of Kelantan Submit”.

The state flag features a white crest against a red background. The color red symbolizes the loyalty of the Kelantanese people and white represents the sanctity of the Ruler.

As early as the 5th century, a Chinese historian named Shen-Yau recorded the existence of a thriving city called Ho-lo-tan or Kuo-lo-tan in the Malay Peninsula. Much later, the Sejarah Melayu (Malay Annals) records that during the reign of Sultan Mahmud Shah of Malacca, three princesses ruled Kelantan.

Early accounts of Kelantan history show it was embroiled in constant political turmoil with Thailand to the north and Terengganu, Pahang, and Johor to the south.

After the fall of the Malacca Sultanate in the 15th century, Kelantan fell on and off under the influence of neighboring Patani. The Siamese eventually established their influence over Kelantan following a treaty in 1832. Later, Siam dispatched a British adviser with the title of Siamese High Commissioner to Kelantan. W.A. Graham was appointed the first Siamese High Commissioner in 1902.

Then in 1909, the British and Siamese ratified the Bangkok Agreement, delivering Kelantan to the British and J.S. Mascon was dispatched as the first British adviser. The Japanese invasion in 1941 saw Kelantan being handed back to Siam during the Japanese Occupation. In September 1945, Kelantan was placed under the British Military Administration.

The British in London formed the Malayan Peninsula Planning Unit in 1943; and on 10 October 1945, the Malayan Union scheme was presented to the British Parliament. Sir Harold MacMichael was sent to obtain the agreement of the Malay Rulers. According to the plan, Penang, Malacca, and 9 Malay states were to be united under the Malayan Union.

However, the Malay opposition derailed the Malayan Union plan. The Malays united under the leadership of Dato’ Onn Jaafar to form the United Malays National Organisation (UMNO) on 11 May 1946. Finally, the Federation of Malaya was founded on 1 February 1948, and on 31 August 1957, Malaya gained independence from the British.

Kelantan is known as the “Cradle of Malay Culture”. The Kelantanese have kept alive their rich traditions and customs, giving the State an old-world charm. Kelantan is not only renowned for its batik cloth production but is a thriving center of cultural arts like Wayang Kulit, Dikir Barat, Mak Yong, and Rebana Ubi. It is also famous for the traditional sports of kite-flying and top-spinning.